The boys have started counting down the weeks until we go home to my parents' house in the Outer Hebrides for a few weeks in the summer holidays. 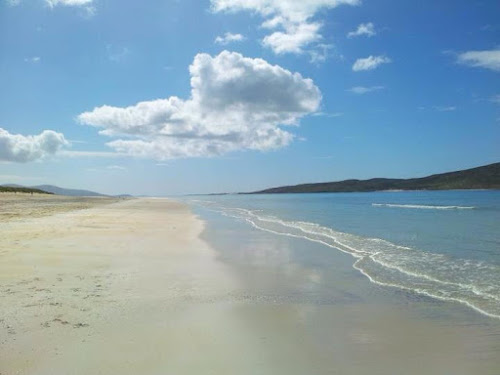 I know I've shared lots of photos on here of how beautiful our Hebridean islands are but here is one better.

We have just finished watching a series of documentaries about the wildlife on the Hebrides. The scenery is amazing and we all especially loved the third episode in the series as it was all about the Outer Hebrides. Lots of arial shots of those beautiful white beaches.

You can watch the third episode here. I hope it works for those not in the UK!

It might give you a glimpse of why we love going home to the island so much. That and seeing family as well, of course! 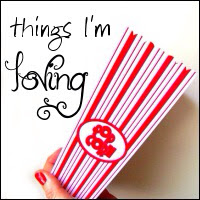 Is it just in the UK or do Coca Cola have their 'share a coke with a friend' campaign anywhere else just now?

They have 100 of the most popular names in the UK on their bottles and you can check on their website whether your name is there. Mine isn't, but I didn't really expect it to be!

It's quite a clever marketing ploy because we would never normally buy Coca Cola but when the boys found their names we bought the bottle! There isn't a David but Dave is close enough! 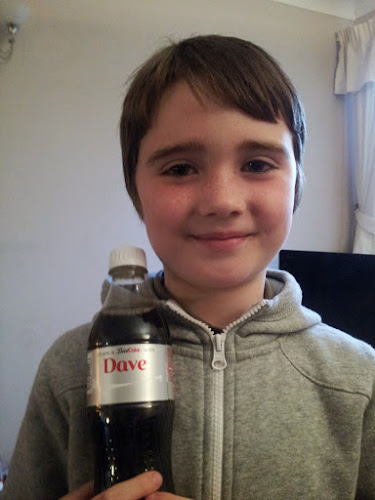 And they have the wrong spelling of Calum too but I was actually surprised that they had it at all. 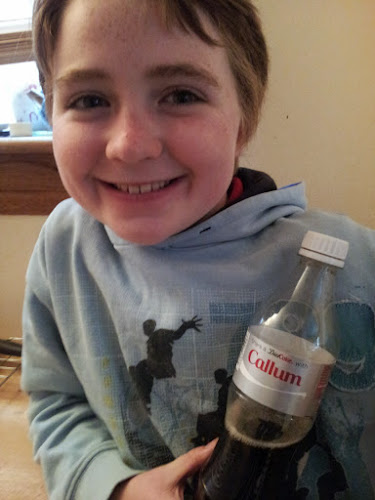 There is no Alasdair though. Or a Kirsteen. I guess we are just a bit more unique :0)

It has been a better week weather wise this week. Definitely more spring like, although still not as warm as we would like for this time in May.

Still, it was nice to get some sunshine.

I grabbed 10 minutes peace to eat one of my hidden supply of Magnum Ice Lollies, then after taking the photo noticed the tell tale signs of boys in the background. How many can you spot?! 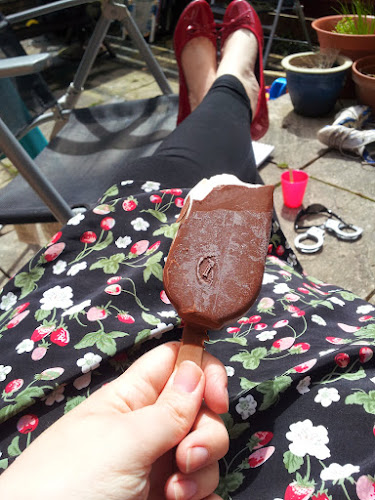 Finally, last weekend we watched the newest of the Herbie movies. James and Calum had seen it before but David and Alasdair hadn't. After watching it, Calum dug out his old Herbie car that he had been given for his birthday around the time that film was released and gave it to Alasdair.
Alasdair absolutely loved the film and has been playing with Herbie all week. He loves him so much that he has even been taking him to bed with him! 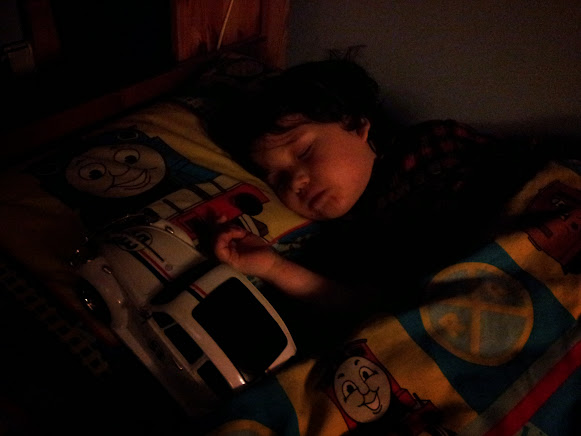 Tonight we watched the original Herbie movie, 'The Love Bug', which everyone loved even more. David seemed surprised when I told him that it had been filmed before I was even born!

Have a great weekend everyone!

A few weeks ago the boys and daddy came home from a Sunday afternoon walk with a jam jar containing a little bit of frogspawn.

The sand pit was still waiting for some decent weather to let us give it it's annual spring clean, followed by some nice new sand for the summer, and so since it was sitting empty it was decided to fill it with water and turn it into a pond for the frogspawn, until they grow up anyway!

The boys kept an eager eye on the eggs and were very excited to see them hatch into tiny tadpoles after about 10 days.

The tiny tadpoles are now bigger tadpoles but still have no sign of the little legs growing on them. 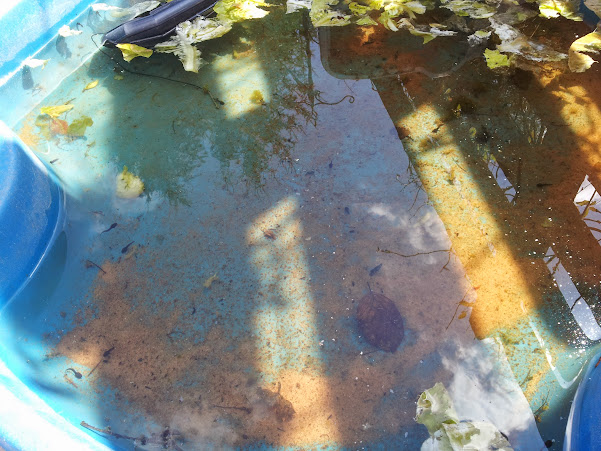 Alasdair (3) decided to put that boat in the top left of the 'pond' in for the tadpoles because he thought they might like it. Turns out that they do actually quite like it as we often find them gathering underneath it! 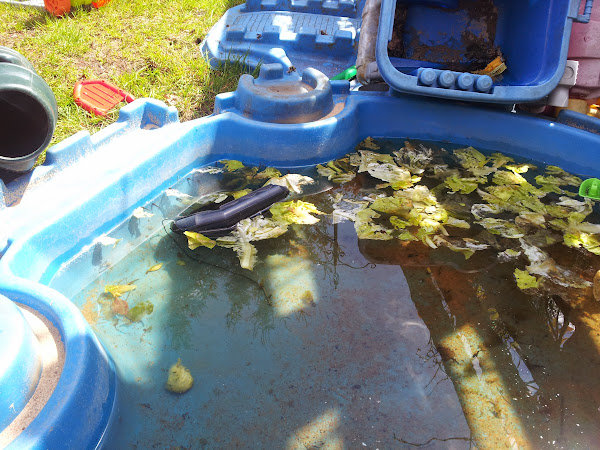 It's funny to see how mesmerised they can all be just watching the tadpoles swim around. James (13) had a friend round today and they both sat with the other boys watching for a while! 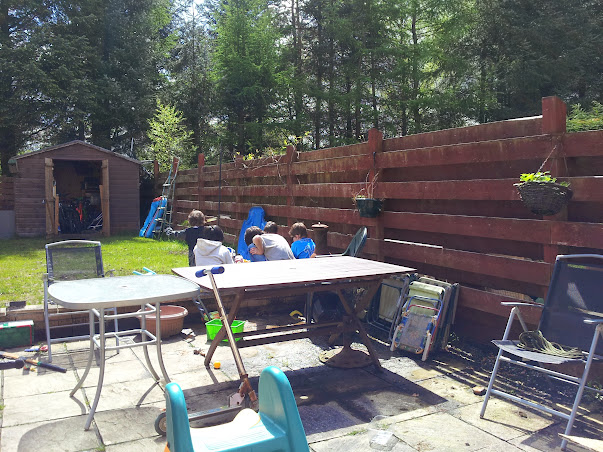 Calum (10) has always been our biggest wildlife/animal fan. Today he decided to start keeping a journal of wildlife he sees throughout the summer.
He has divided his journal into three sections: what he sees in our garden; what he sees when we go back to Lewis in the summer; and what he sees anywhere else.
He made a start on the garden section today. As well as writing about the tadpoles, he has been keeping an eye on some Blue Tits. In the photo above, if you look at the shed at the back of the photo you can just make out a nesting box on the top left corner. About 6 weeks ago we were in the kitchen when we saw some Blue Tits flying in and out of it. We also noticed one of the birds sitting on top of a tennis ball on the grass. We realised that the tennis ball was burst (thanks to Auntie Anna's dog!) and that the bird was taking bits of the stuffing out and then taking it into the nesting box.
The birds are still flying in and out of the box, and although we can't see inside it, Calum has been researching in some of his bird spotting books where he learned that Blue Tits usually lay their eggs in April and May. 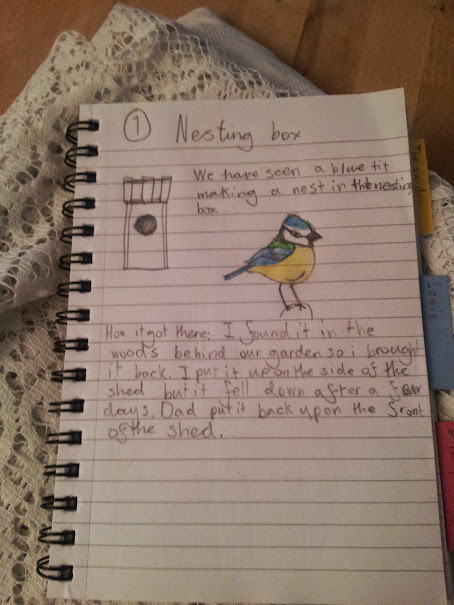 Will keep you posted about whether we see any baby birds!

As for the tadpoles, well Alasdair keeps telling people they are going to hop into our house when they turn into frogs!

Well I can't quite believe a week has flown by since I last posted, but don't you just find that some weeks are like that?

We didn't have anything major on last week, just life really.

The boys were able to briefly see my dad as he passed through on his way home from a trip to Korea. I think that's his third time visiting there. My mum wasn't able to go with him this time as my youngest brother is still at school and has exams coming up but they have been quite the globe travellers the last few years with trips to Korea, South Africa and New Zealand to name just a few places!

Anyway, Calum collects bank notes and coins and so asked if Shen could bring him back some currency. His eyes lit up when my dad handed him a 3000 Won note. He was then informed that this is actually only equivalent to less than £1! As US dollars are also legal tender in Korea my dad also gave him a $1 note. Calum is quite chuffed with his growing wee collection of notes.

My dad has recently joined the blogging world too, so after plugging my husband's blog a few weeks back it's now time to plug my dad's. Especially this week as he has his trip to Korea on in with some video clips of lovely Korean singing on it. You can find his blog here.

There was more excitement for Calum this week. His (and ours) favourite band, Mànran, released their new album last week and the first 200 people who ordered would receive a signed copy.

Well look what was waiting for Calum in the post the other day! 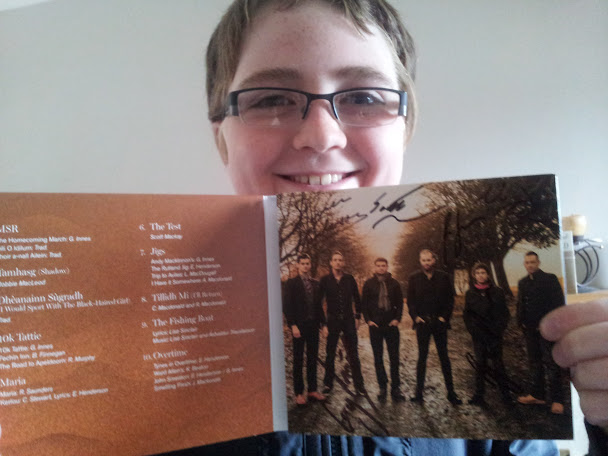 Great tunes on it too. We love it!

You can listen to a wee sample of what they sound like on their website here. Go on, a bit of modern Gaelic folky type music. You won't regret it!

Ok, we'll that's two rather contrasting sites I've sent you off to tonight. I think that's enough miscellany for one night!

...our first barbecue of the season.

Last year we had our first barbecue of the season at the end of March, which to be fair is a little earlier than usual, but normally we kick start the barbecuing sometime in April.

It still wasn't quite warm enough to eat outside, even though the boys (especially Alasdair) were very keen to do so, but for comforts sake we ate indoors. Barbecued food tastes just as good indoors or out!

Here is dad's eager helper keeping an eye on the onions. 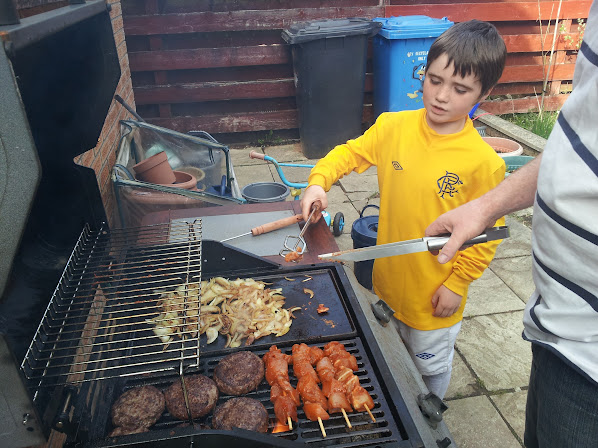 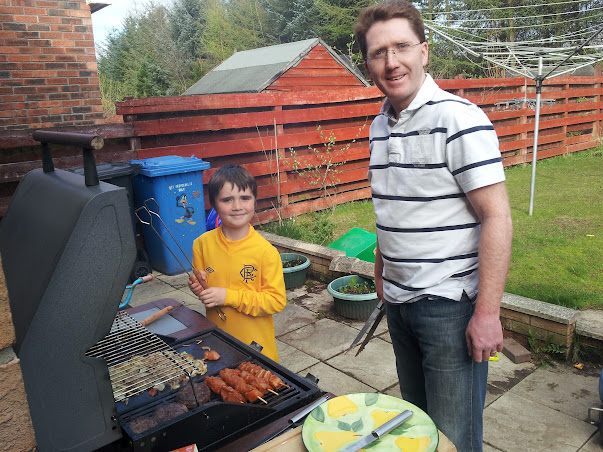 Incidentally, the eager helper was wearing a new football top. He has quite a few football tops but no goalie tops and so he was quite chuffed to get this one today. 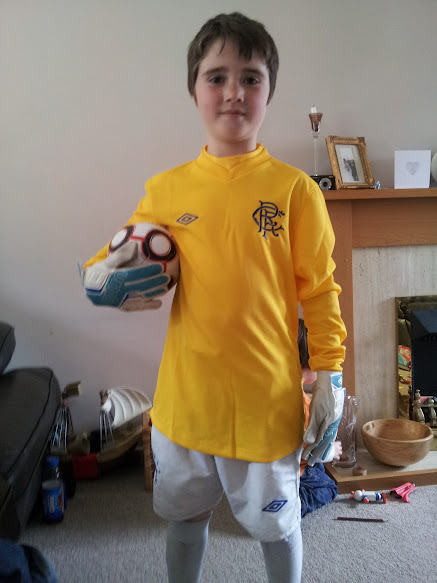 Typical of this boy though, it didn't quite stay in its pristine new condition for long! An afternoon playing football soon saw to that. 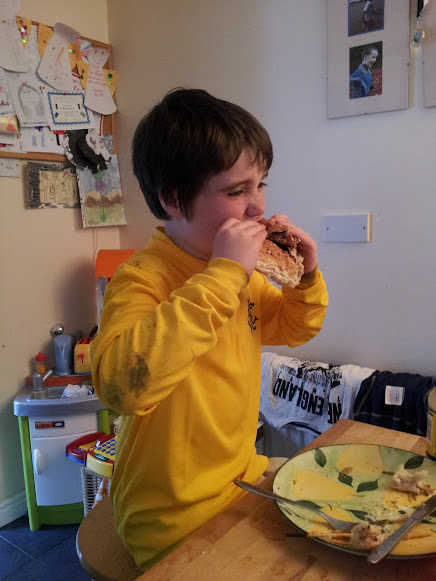 Football tops aren't meant to be clean anyway are they, and that's why we have washing machines!

And boy did he enjoy his burgers and onions too!