Recipe of the Week - Hebridean Oatcakes

As promised last week, this weeks recipe is for the oatcakes to have with your soup. They are kind of 'rustic' in style. Just like my granny would make. Fat and chunky and not too neat around the edges. They crumble and melt in your mouth.

These are also delicious with a thick spread of butter and a chunk of cheese. Or some hot smoked salmon. I also like them with butter and jam but I think this may be considered sacrilege in some parts! :) 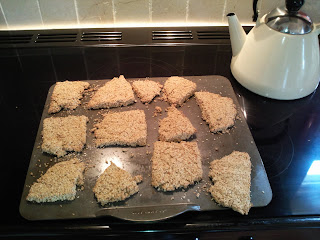 8 oz medium oatmeal (I love Alford's Oatmeal)
1/2 tsp salt
1/4 tsp baking powder
1 oz melted butter
about 2-3fl oz boiling water.
- Put all the dry ingredients in a bowl and mix together.
-Add the melted butter and enough of the water to make a stiff dough.
-Sprinkle a little more oatmeal on the work surface and place the dough on here.
-Gently roll into a thick-ish circle, about 1cm or so thick. It is a bit crumbly so don't be too vigorous with it!
-Cut into triangles with a knife and place on a greased baking tray.
- Bake in the oven at 170C for about 20 minutes.
-When they are done, carefully lift them onto a wire rack to cool down.
Apparently Scottish soldiers of old would pack some oatmeal and a plate to cook oatcakes on in their bags. And although, traditionally eaten at breakfast time, oatcakes were also used to make sandwiches instead of bread.
I've forgotten to put my Gaelic word for the day on for a few posts so today it is:
aran-coirce (aran-corck) - oatcake
aran is the Gaelic for bread and coirce is the word for oats 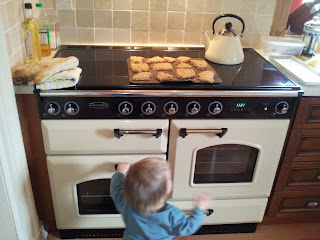